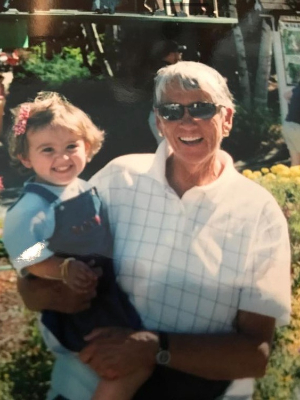 On October 2, I will be running the 2022 Maine Marathon with the Marr Fund Team to support the Josephine and John Marr Alzheimer’s Research Fund at Brigham and Women’s Hospital.

Established by my grandfather, John Marr, and the rest of my family in 2015, the fund was inspired by my grandmother, Josephine Marr, who battled Alzheimer's for over a decade. In partnership with Drs. Dennis Selkoe and Reisa Sperling at Brigham & Women's Hospital, the fund works to advance novel and early-stage research aimed at preventing Alzheimer's disease.

Over the last eight years, the Marr Fund has raised more than $1.6 million through the Maine Marathon event itself and served as a catalyst for many millions more in additional support. Research supported by these funds has confirmed that the brain changes responsible for Alzheimer's disease begin decades before symptoms appear, and that the amyloid protein is particularly important early in the disease. Data from studies supported by the fund have also enabled Dr. Sperling to launch two NIH-funded global Alzheimer's prevention trials, which include patients as young as 55. Currently, the Marr Fund support is directed at two projects — Dr. Tracy Young-Pearse's use of stem cells to better understand genetic risk in different individuals and identify paths towards new treatments, and Dr. Rachel Buckley's work to identify the characteristics (genetic, lifestyle, brain health, demographics, etc.) that make some people more resilient to Alzheimer's. You can read more about the research supported by the Marr Fund here: bwhgiving.org/marr-fund.

To run my first marathon surrounded by so many friends and family members who run in honor of my grandmother and other loved ones affected by Alzheimer's will be an exhilarating (and tiring) experience. Watching my grandmother fight an incurable disease has motivated my family to participate in the search for treatment and prevention methods so that, eventually, no one will ever again be faced with Alzheimer's. As difficult as my grandmother's illness was, it is so gratifying to see the good that it has inspired.

Thank you so much for joining in the battle against Alzheimer's disease. Donations of any size are greatly appreciated.