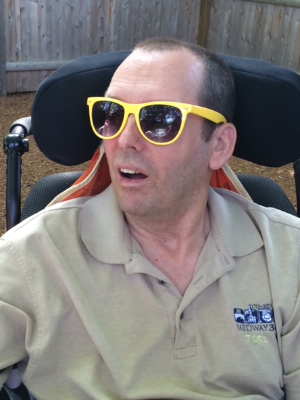 I’ll never forget the day my life changed forever. My stepmom and dad sat me and my sister down to tell us that my dad Joel had been diagnosed with early-onset Alzheimer’s disease at the age of 50. I was a college freshman at the time and didn’t quite understand the severity of what they were telling us - I’m not sure any of us really did. I remember him saying at the time, “This is not a death sentence”. We were all so naïve, thinking he would become a bit more forgetful and maybe need some extra reminders. We were devastated, but I thought we could handle it.

But I quickly learned that Alzheimer’s is SO much more than memory loss and for the next several years, I watched my dad struggle in more ways than one. He lost his ability to form sentences early on or would lose his train of thought in the middle of a sentence. He battled mood swings, depression, agitation, and multiple health complications like pneumonia. These are the parts of Alzheimer’s disease that people often aren't aware of or that don’t get talked about enough.

By 2014, we had no choice but to place my dad into long-term care. I visited him on Sundays to watch the Patriots game or to share a dessert from the local bakery. While it was not exactly how I envisioned spending my weekends as a young adult, I really loved our time together. He was slipping away a little more each day and the fun-loving, goofy dad I grew up with lost his personality, his humor, and himself. He became someone who couldn’t feed himself or dress himself. He was in a wheelchair for years after Alzheimer’s robbed him of his ability to walk. I felt like every day for 10 years, I was slowly saying goodbye to my dad.

On December 7, 2018 we said our final goodbye to the best dad, husband, grandfather, brother, and friend in the world. After a long battle my dad decided he didn’t want to fight anymore and passed away peacefully surrounded my family and friends. It’s a day I knew would come and one that I thought I would be more prepared for, but I quickly learned nothing could've prepared me for his loss. Some days it feels like he’s been gone an eternity, and other days it feels like it just happened yesterday. I miss the dad he was to me before he was sick but I would also do anything to have even the sick version of him back.

Though I am glad to know he is no longer suffering and I find some peace in that, I am still having a hard time doing life without him. My dad was the greatest man to ever live. He was a lover of peanut butter, Funny Bones, ice cream, and The Who. Before he was diagnosed with Alzheimer's, he would stop to pet every dog on the street and say “Hi, Pooch!” with as much excitement as a kid. He was a home brewer and created a label of Osborne Brewing Company beers. He volunteered at a cat shelter in his free time. He was always just a phone call away on my toughest days, and always down to watch “What Not to Wear” or cooking shows with me on a random Saturday morning. There was just no one in the world quite like him. Alzheimer’s robbed him of all of this - his hobbies, his personality, his love for life. It robbed us of future memories together. I wish my husband Andy had gotten to know him more before he got sick, I wish my future kids would know their grandfather. Not a day goes by that I don’t think of him and all the memories that our family will miss out on. Grief is an ongoing battle and I continue to face it head on.

However, two of the many things I learned from my dad are – 1. to never give up, and 2. to conquer fears. I have a new outlook on life since he died. An outlook that makes me say yes to things that are challenging or that scare me because life is too short to keep hiding in our comfort zones.

That’s why I am running the BAA 10K for the second year. I am not a strong runner but I am taking this race on once again as a challenge for myself and am “Jogging for Joel”. For 6 years, I worked in the BWH Development Office and saw firsthand the work that the researchers and physicians there did on a daily basis across all areas of medicine. But the researchers working on Alzheimer’s are in a league of their own. I truly feel that Dr. Selkoe, Dr. Sperling. and their team will be the ones to find a cure for this awful disease. I am honored to run on behalf of this group of scientists who are striving to prevent this disease for future generations.

Now I am an employee of the Alzheimer's Association, fighting this disease every single day. It has become my life mission to End Alzheimer’s in my dad’s memory. While it won’t bring my dad back, my hope is that I can fundraise as much money as possible that will hopefully one day lead to a cure, and be a part of providing some support and connection to families experiencing Alzheimer’s.  I want to make a difference and change the trajectory of this disease so that no other family has to be torn apart by Alzheimer’s. I won’t stop until we #EndAlz once and for all. So even though it’s harder now, I know need to keep up the fight. But I can’t do it alone!

I hope you’ll join me! You can walk or run with me, donate, or share my fundraising page. Every little bit helps BWH get closer to finding a cure for this disease that affects millions across the country. I know it’ll come one day, and while it's too late for my dad, it’s not too late for us.  Thank you all for taking the time to read this! Your donations mean so much, but your love and support throughout this journey mean so much more.

Dad - I hope you are eating all the ice cream and Funny Bones you want, drinking beer with all those who left this world before you, listening to The Who on repeat, and living life to the fullest again. I miss you every day. This (and everything I do) is for you.